The Sale of Eggs 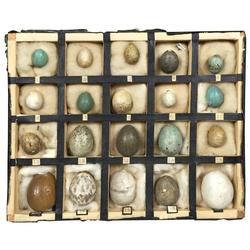 Possession of wild birds' eggs is an offence of strict liability. Anyone who chooses to be in possession of eggs is obliged to show, on a balance of probabilities, that their possession is lawful. For persons found guilty of any of these offences, Magistrates have the power to impose an unlimited fine and/or six month's imprisonment per egg.

The law defines a wild bird as "any bird that is ordinarily resident in or is a visitor to Great Britain in a wild state". It does not include poultry, game birds (subject to conditions) and any bird bred in captivity.

While it is not illegal to own wild birds' eggs, it is unlawful to enter them into commerce. Unlike the international CITES legislation covering the sale of endangered species (which permits the sale of items worked prior to 1947), the law makes no allowance for the age or type of eggs or when they may have been collected.

If you have an egg collection in your possession, then you would not be breaking the law as long as you can prove the collection predates 1981. It is unlikely that you would ever be taken to court but be aware that the burden of proof of age would then lie with you; the prosecutor only needs to prove possession.

It is illegal to sell any egg collection, no matter how old it is. The eggs must be given away or destroyed although passing them on to someone else only hands the problem over to them. Many people find it difficult to destroy an egg collection, particularly if they have a sentimental attachment to it and consider giving them to museums.

However, museums will only take collections if they include accurate and reliable data, otherwise they have no scientific value and egg collections are no longer openly displayed in museums. If your egg collection has provenance, then it could be important to science as a source of information on the past lives and distributions of bird populations.