Who was Robert 'Mouseman' Thompson

For our 30th January 2021 sale we have a delightful pair of Mouseman candlesticks and a bowl....but who was the 'Mouseman'? 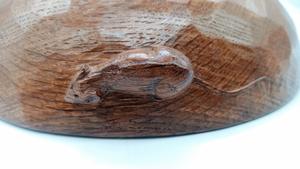 Wincanton Auctions are delighted to offer for auction a pair of Robert ‘The Mouseman’ Thompson candlesticks and a bowl in our Saturday 30th January 2021 sale.

Robert (Mousey) Thompson (7 May 1876 – 8 December 1955) was a British oak furniture maker famous for his trademark of a carved mouse on almost every piece.

He was born and lived in Kilburn, North Yorkshire, and it is claimed that the mouse motif came about accidentally in 1919 following a conversation about "being as poor as a church mouse", which took place between Thompson and one of his colleagues during the carving of a cornice for a church screen. This chance remark led to him carving a mouse and this remained part of his work ever after. 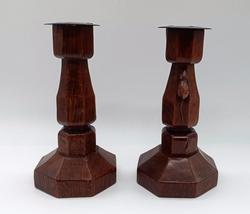 The mouse (each one took 45 minutes to carve) signifies 'industry in quiet places' and was finally registered as a trademark in the 1930s after it had inspired others, now known as ‘The Critters’ who continue in his style working in Yorkshire oak, to adopt similar identifying marks and nicknames, such as Thomas "Gnomeman" Whittaker, Colin "Beaverman" Almack, Wilf "Squirrelman" Hutchinson, Malcolm "Foxman" Pipes and others.

Mouseman furniture is still made today in Kilburn by Robert Thompson’s Craftsmen Ltd using the same traditional techniques and skills and where one man's work from start to finish remains the ethos.

Because of this it can be challenging to date a Mouseman piece however a good clue to the date is the signature (the mouse) where the earliest mice have front paws that were prone to breaking. You will see them on domestic furniture from the 1920s into the 30s before a cuter little chap, without paws, makes his debut.

What makes the candlestick especially unusual is that they are known to have been a personal gift to Robert Thompson’s Housekeeper Alexandrina Dey.