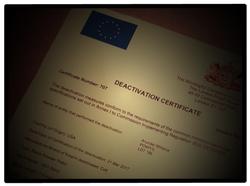 Wincanton Auctions have chosen at this time not to offer for sale working firearms for which a firearms license would be required.

What counts as a firearm

Firearms are lethal barrelled weapons and other weapons including:

We are however pleased to offer for sale de-activated weapons which meet the current requirements as detailed below.

What is a deactivated weapon?

A deactivated weapon is a real firearm which has been altered in such a way that it is no longer capable of discharging any bullet, missile or other projectile. EU/UK deactivated weapons will have been submitted to one of two Proof Houses (Birmingham and London) in order to check that they have been correctly deactivated to EU/UK specifications. If this is the case they are stamped accordingly and have a deactivation certificate issued. This clearly states what the weapon is and records its serial number. This certficate provides evidential proof that the weapon is no longer a firearm in the eyes of the law and that it is perfectly legal for an individual to own.

From 2 May 2017, the new legal provisions on firearms in the Police and Crime Act 2017, prohibit the sale, loan or transfer of any firearm that has not been deactivated to the current Home Office Technical standard.

This standard is essentially the EU standard with a number of additional UK processes and can be subject to further revision in the future. The new law does not affect ownership of firearms deactivated to prior standards, as long as you have the relevant certificate, but prohibits the transfer by sale, swap, gifting or inheritance of pre-April 2016 deactivated firearms. This includes all firearms deactivated to any of the previous UK standards, from 1988 onwards.

The same amendment also states that, ‘It is an offence for a person who owns or claims to own defectively deactivated weapon (ie not to the specification) to: (a) make the weapon available for sale or as a gift to another person or (b) to sell it or give it (as a gift) to another person.’

However, owners of any old-spec deactivated weapons can sell or gift them to anyone outside the EU, and also sell or gift them to museums that have a relevant firearms licence. Museums are also excluded from the scope of the new offence provided they have a museum firearm licence.

The offence for breaking the law in England is up to six months imprisonment, or a fine, or both, until section 154(1) of the Criminal Justice Act 2003 comes into force, when it increases to 12 months. In Scotland it’s 12 months from the start. If the law is broken with, essentially, criminal intent or use, the custodial sentence increases to five years.

In effect, such items are locked to the current owner and if that person passes away, then any deactivated firearms in the estate will have to be subjected to current deactivation specification processes in order to be inherited, or be surrendered to the Police by the estate.

Collections of pre-2016 deactivated weapons will be effectively rendered unsellable within the EU, unless the owner is willing to carry out the draconian sabotage to their collection to meet the new specifications.

From 12th December 2019, DWSUK along with anyone else transferring (selling, etc.) a deactivated firearm now has to notify the Home Office of all transfers including the name and address of the purchaser.